It may sound trite, but Coober Pedy is not like anywhere else. There are a number of scorched-earth desert locales across the world – from towns in the far reaches of the Sonoran Desert in Arizona to dusty villages in Spain’s equivalent of the Wild West, the Taberna Desert – but Coober Pedy in the remote reaches of South Australia has a distinctive character. Whether it’s the lunar-like landscape, its rough-and-tumble opal mining history, or the unusual underground living, Coober Pedy is truly unique. That is likely why it was selected as the set for movies such as Mad Max 3, Pitch Black, Red Planet, and Mortal Kombat. Here are just some of the highlights of this fascinating destination.

Coober Pedy sits on the traditional lands of the Arabana people, but it is also significant to the Kokatha and Yankuntjatjarra people. Rumour has it that the town’s name is a derivation of the Kokatha words “Kupa Piti”, literally translated as “white man in a hole”,  due to Coober Pedy’s mining history. Australia has 95% of the world’s supply of commercial opal and the largest percentage by mass comes from the 70-odd opal fields around Coober Pedy. Naturally, this means there is a plethora of opal-related activity around town.

For a starter, there’s the Umoona Opal Mine and Museum, halfway down the main street. This mine was first worked in the 1920s. Now, daily tours take visitors through the history of mining and on to an understanding of what to look for when it comes to opal types and quality. It’s not all mining either – the tour includes an underground home, giving insight into a fascinating aspect of life in Coober Pedy.

Similarly, the Old Timers Mine was first dug in 1916. Here you can take a self-guided tour through the Old Timers Mine & Museum, check out two underground homes, and try your hand at ‘noodling’ – fossicking for opal discards. If you’re not all mined out yet, there’s also Tom’s Opal Mine, just off the Stuart Highway on the edge of town. This is another authentic opal mine that was worked in the 80s and 90s. It is now a display mine, showcasing underground workings with opal seams visible throughout. There are guided or self-guided tours on offer, along with more noodling. 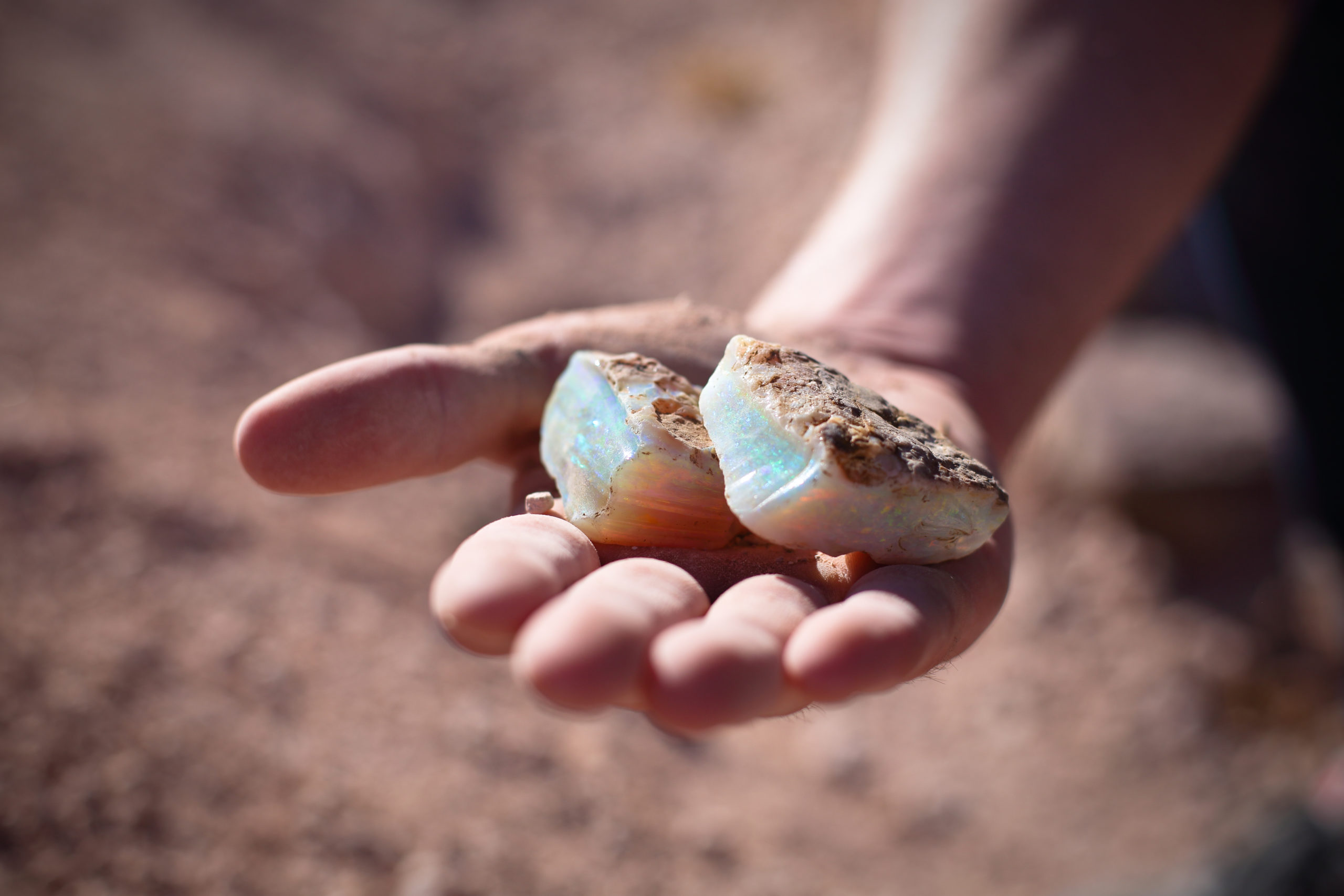 As the mines were dug out, the miners discovered it was cooler being underground during the harsh summer heat – the average summer daytime temperature is 37°C. This kicked off the concept of dugout houses, which tend to hover around the 23°C mark. Now, around 60% of Coober Pedy residents live in these underground homes. It’s not just houses either. Hotels, motels, shops, art galleries and churches can all be found underground.

Mining contributed to a diverse population in this area, with people coming to seek their fortunes. One of the things they brought with them was their churches, the most impressive being the Serbian Orthodox Church of Saint Elijah the Prophet. It was completed in 1993 and has some beautiful striations in the carved ceiling and walls, as well as stained glass and rock carvings.

If underground living – or 1970s interior design – captures your imagination, it’s worth visiting Faye’s Underground Home. Faye Nayler, Ettie Hall and Sue Bernard mined for opals and dug out rooms as they went over a 10-year period from 1962 to 1972. The women opened the house to tourists in 1972 and it remains in its original condition, complete with all the mod-cons, including a small indoor pool. The Big Winch and Quirky Artworks

You can’t miss the Big Winch as you make your way through town. Sitting atop one of the small hills, the Big Winch was originally built in the 1970s to celebrate Coober Pedy being the “Opal Capital of the World”. No visit to Coober Pedy is complete without soaking up a sunset from the Big Winch – or the cafe and bar next door. The latest addition is Coober Pedy’s Big Winch 360, home to Australia’s first permanent  360º Circlevision cinematic experience, which runs hourly during the day.

While you’re at the Big Winch, note also the Steel Tree. This was created by Bob Amorosi to give his kids the experience of a tree in a town that at the time, had none. Another quirky sculpture back in town is the Big Miner, a six-metre-tall metal statue of, you guessed it, a miner. And if eccentricity appeals, take the short drive out of town to Crocodile Harry’s Nest & Dugout. Suffice to say, Crocodile Harry was a character, evident by the memorabilia decorating every inch of his dugout. If it looks familiar, that may be because it made an appearance in both Mad Max Beyond Thunderdome and Pitch Black. For more Hollywood connections, the spaceship from Pitch Black sits quietly crumbling on the main drag.

If you prefer your art more traditional, head to Josephine’s Gallery and Kangaroo Orphanage. The art gallery showcases locally made Aboriginal art, while the orphanage gives orphaned joeys a fighting chance at a new life.

About 30 kilometres north of town is another artistic location, but this one was created by nature. Covering almost 15,000 hectares, the Kanku-Breakaways Conservation Park is known for the colourful low hills that, from a distance, look like they have broken away from the Stuart Range. Two lookouts highlight the broad open spaces, punctuated by the occasional majestic flat-topped mesa or weathered rock formation. The golden hour in the late afternoon is the best time to visit the warm, pre-dusk glow highlights the colours, making the land look as though it has been painted with broad brushstrokes of ruby, orange and salmon.

While you’re out of town,  consider a stop at the Dingo Fence, too. It’s just a fence, but the sheer enormity of erecting something of this scale is a lesson in ambition. Since the 1880s, it has been preventing dingoes moving into sheep-grazing lands, dividing the country as it stretches more than 5,600 kilometres across three states.