If there’s any place that represents the spiritual heart of Australia, it has to be Alice Springs, where stunning landscapes, remote communities, and a pioneering past merge to create one of the country’s most diverse destinations to explore. The landscape alone is host to red desert sands, spinifex dunes, rocky chasms, ghost gums and a diverse wildlife as rich as its history.

Alice Springs – the third largest town in the Northern Territory – and its surrounds is home to rivers and ranges millions of years old and ancient Indigenous culture, represented through art and story. The Arrernte people, the traditional owners of Alice Springs and the surrounding MacDonnell Ranges, have lived in the area for at least 30,000 years and contributed to the cultural tapestry that makes up Alice today.

Dotted around town, there are numerous sites of historical significance referencing the region’s settler history. Nowhere else is the adventurous spirit of Australia so evident and so clearly traceable through time. Here are just some of the experiences in Alice that draw a line between past, present and future.

Alice Springs was established in 1861 by John McDouall Stuart during an expedition through Central Australia. Originally called Stuart, it was renamed Alice Springs when the Australian Overland Telegraph Line repeater station was constructed. Playing a key role in connecting Darwin to Adelaide, the telegraph line was completed in 1872, spanning 3200 km, and is considered to be one of the great engineering feats of 19th-century Australia. The Alice Springs Telegraph Station Historical Reserve marks the original site of the first European settlement in Alice Springs. The Telegraph Station and outbuildings here have been beautifully restored and tell the story of the town’s beginnings; its hardy pioneers; the First Peoples – the Aboriginal people; and others who helped establish the town. 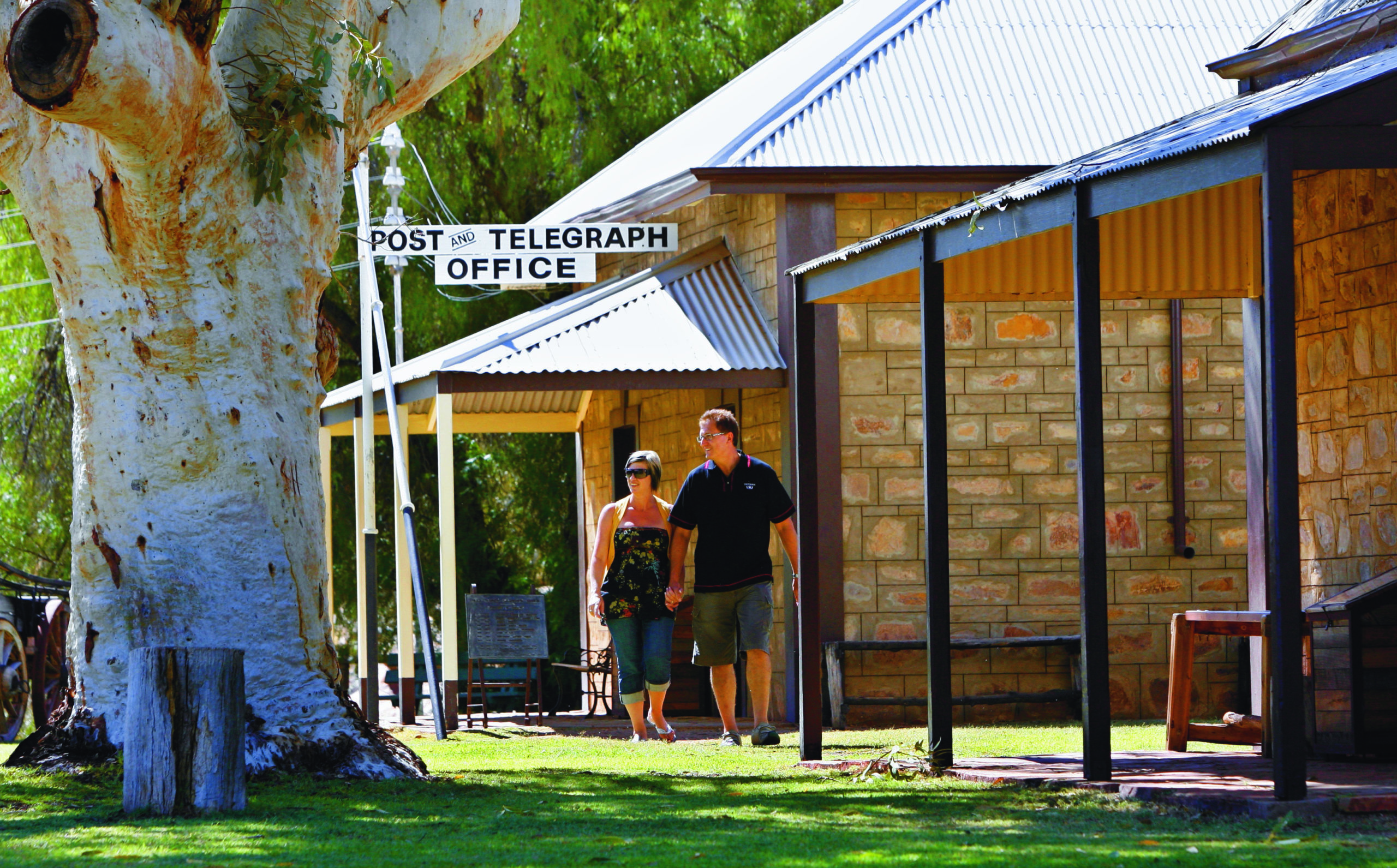 During WWII, the small town of Alice Springs became a military hub, known as No. 9 Staging Camp. It was filled with military personnel and became the war-time civilian capital of the Northern Territory when Darwin was bombed. The RSL War Museum at the Alice Springs RSL Club, a favoured watering hole for veterans, features war-time memorabilia and historic photographs depicting some of this history.

Alice Springs is the spiritual home of the Arrernte Aboriginal people, whose Dreamtime story depicts the region being created by giant caterpillars, which eventually became the ridges of the MacDonnell Ranges that shelter the town. The artistic imagery of this and many other ancient stories can be found in this precinct, within numerous art galleries, museums, and sacred sites. This allows for deeper exploration of Aboriginal art, culture, and heritage.

Royal Flying Doctor Service network played a key role in putting Alice Springs on the map, as well as delivering valuable medical services to some of the most remote areas of the country. Reverend John Flynn established RFDS in 1928 to provide medical help to people living in the outback who, when seriously injured, had to travel hundreds of kilometres by horse, cart, or camel to reach a doctor. The RFDS remains an active service to this day – in the fiscal year 2020-2021, RFDS made 10,097 aeromedical retrievals, playing a pivotal role in Australia’s medical tapestry. The RFDS Visitor Centre is a must-see, housing a detailed museum, holographic theatre, and “live to air” screen that depicts the locations of all RFDS planes.

School of the Air

Along with the RFDS, the School of the Air also began in Alice Springs. In 1950, Adelaide Miethke, the head of the SA branch of the RFDS, harnessed the RFDS radio network to broadcast lessons to children living remotely, who were unable to attend school regularly or easily. The School of the Air remains an integral part of life for children who live in remote areas across the country, with approximately 25 distance schools in operation. You can visit the world’s largest classroom (extending over 1.3 million square kilometres) at the school’s Visitor Centre.

If you’re looking for a different perspective on Alice, take a short climb to the top of Anzac Hill in the centre of town for unparalleled views across Alice Springs. This is the perfect spot for sunrise and sunset.

The Alice Springs Desert Park, 7km from the town centre, provides the opportunity to get up close with kangaroos, emus, and birds of prey, with walk-through aviaries and the largest nocturnal house in the Southern Hemisphere. In addition to wildlife, visitors get a hands-on education on the diversity contained within Australia’s deserts, from majestic landscapes to native plants and wildlife adapted for these often-harsh climes. Located 18km west of Alice, connect with nature at Simpson’s Gap on one of its many trail walks, including a short wheelchair-friendly walk to the Gap itself. Journey to Cassia Hill or traverse all or part of the 18km Woodland Trail. If you look carefully, you might get lucky and spot an endangered black-footed rock wallaby.

Strolling through history is hunger-inducing, but never fear, Alice Springs is home to an array of cafes and restaurants to satisfy any appetite. You’ll often find bush tucker on the menu, including crocodile, emu, kangaroo and native fruits, herbs, and berries. Tuck in and reflect on the fascinating history of this fascinating outback town. 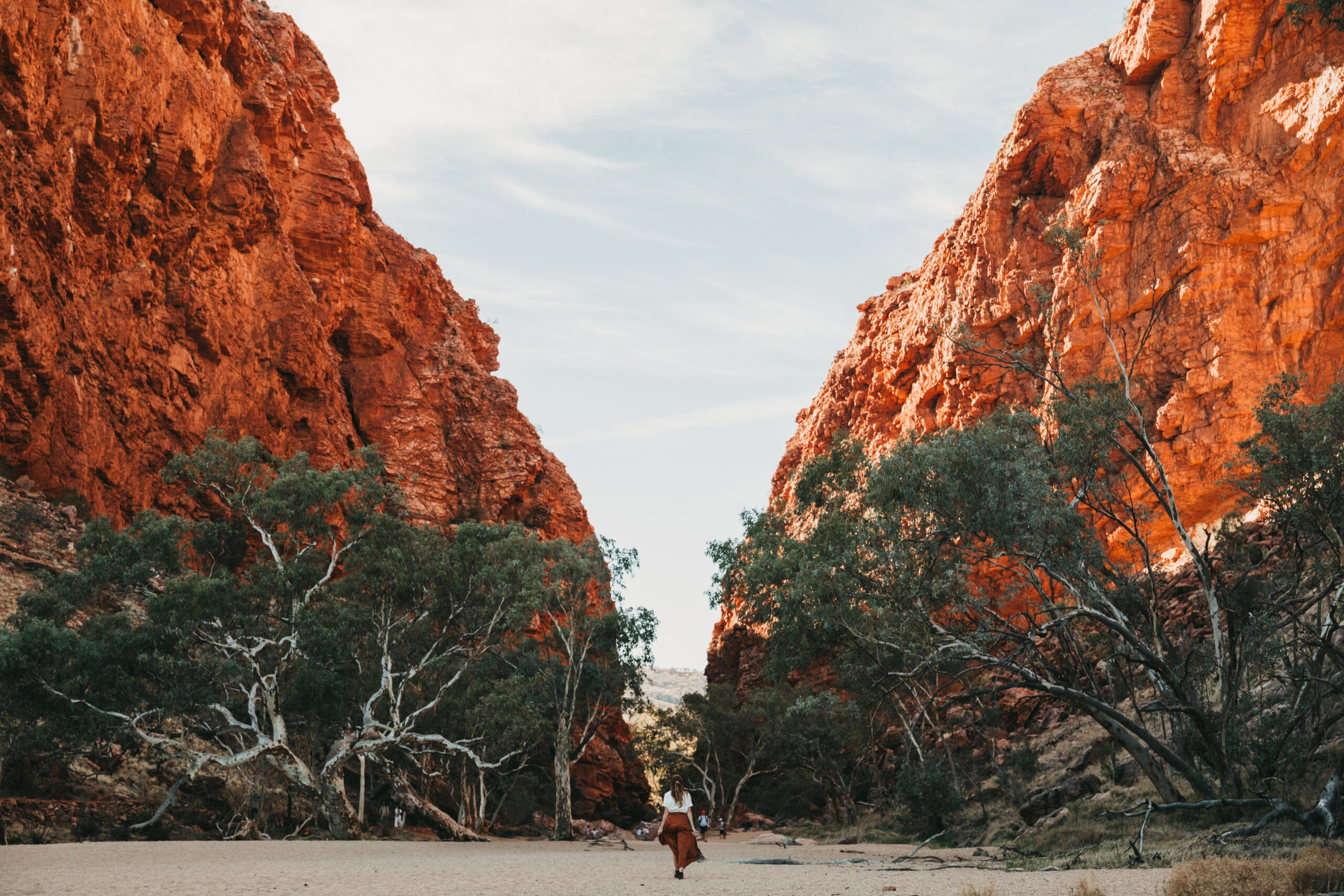